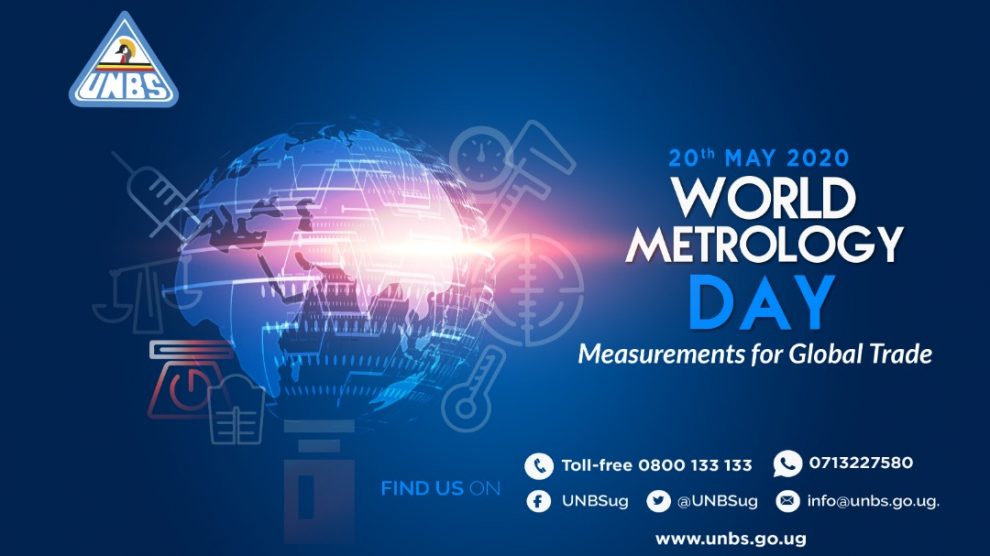 The Uganda National Bureau of Standards (UNBS) joins the world to celebrate the international system of units.

World Metrology Day is an annual celebration commemorating the anniversary of the signing of the Metre Convention in 1875. This treaty provides the basis for a worldwide coherent measurement system that underpins scientific discovery and innovation, industrial manufacturing and international trade, as well as the improvement of the quality of life and the protection of the global environment.

This year, the celebrations are held under the theme; Measurements for Global trade, to create awareness of the important role measurement plays in facilitating fair global trade, ensuring products meet standards and regulations, and satisfying customer quality expectations.

In Uganda, the Uganda National Bureau of Standards (UNBS) carries out the Legal Metrology regulated under the Weights and Measures Act, Cap 103 which mandates UNBS to perform verification of all measuring and weighing equipment used in trade in order to enhance fairness in Trade.

Over the years however, UNBS has reached greater milestones to enhance its service delivery;

Testing energy meters is the latest intervention in UNBS’ area of measurements.

Today however, the Bureau has six (6) portable test equipment that are currently in use and have been able to increase daily output of verified meters from 1,000 to 3,000; thanks to the Memorandum of Understanding with the Ministry of Energy and Mineral development together with Electricity Regulatory Authority (ERA). The bureau also received two test benches from the same, and the equipment is projected to verify 3,500 meters daily translating to a minimum of 84,000 per month. This was able to reduce the backlog and foster increased electricity connectivity throughout the country.

In 2019, the System for Mobile Verification Tool (SMVT), a new ICT tool was deployed for the section of energy meters. It captures verification data for electricity meters both during in-house or field verification. When fully completed the tool will also be able to allow to use the USSD code to check the verification status of any installed electricity meters.  Also during the filed verification, the exact location of the meter will be captured allowing for geographical profiling of each installation.

On the other hand, E-Minzaani, a cutting edge Information Management System was developed by UNBS, aimed at streamlining the adoption of mobile technologies as a tool to improve the efficiency, effectiveness and control of the use of both electronic and mechanical measuring instruments like Counter scales, Spring balances, Platform scales and Weights used in trade. It addresses the Billing and receipting, including printing through a mobile Point of Sale (POS), Licensing, including the printing of mechanics and Workshop licenses, Technician Licenses, Mechanics work logs etc., Workshop Management tracking and Repair Management.

The system includes the implementation of a diversity of information systems covering legal metrology activities conducted by the delegated bodies as well as notified bodies like mechanics, workshops, and is responsible for the control of technical activities, resource application and surveillance of private bodies that are active in legal metrology.

In 2019, the UNBS calibration rig received an upgrade worth 2.36 billion shillings, funded by the government of Uganda. The enhancements included an extra overhead tank which improved capacity for incremental loading during verification, an improved dipping platform and wider size of the adjustable prover platform,  Improved discharge manholes for the calibration medium which reduced redundancy by supporting simultaneous verification of road tankers, a canopy which provides shelter to the officers at work making it possible to offer calibration services regardless of the weather, a paved yard which put an end to dust on sunny days and trucks getting stuck in the mud on rainy days and a lot more. This improved the turnaround time from four (4) fuel tankers to eight (8) in 24 hours.

In addition to these improvements is the e-truck/e-rig; a management information system used for verification of fuel tankers and is said to be faster and more convenient than the traditional method of recording information.

Under the bulk measures section of the Volume and Flow division, bulk flow meters, road tankers and static tank dipsticks are verified.

Fuel dispensing pumps verification; The bulk measures section of the Volume and Flow division also carries out verification of fuel dispensers every six months throughout the country i.e Kampala, Eastern, Northern and Western Regions. In addition to this, surveillance and investigation of petrol stations is done every three months after routine verification exercise to curb illegal behaviour of tampering with UNBS seals applied on the measuring units to cheat the public.

In 2020, Uganda National Bureau of Standards (UNBS) started an inspection programme aimed at verifying the weights and sensitizing distributors on the quantity and safety requirements of LPG in Uganda.  The usage of LPG has become popular and the verification exercise was prompted by growing concerns of underweight LPG being sold on the market.

This exercise is just one of the many done by the pre-packaging section, which ensures compliance of all the goods packed in the absence of the consumer like bread, salt tea leaves and others, ensure full value for money to both local and international consumers by eliminating underweight packs, provide international confidence in measurement of pre-packaged goods that are exported to other countries, limit losses to manufacturers/packers; in case of excess filling/packing and eliminate unfair practices.

The above enhancements and milestones reached at, in the different sections of Legal Metrology have contributed to improved service delivery, which gives reason to celebrate World Metrology Day.

The Uganda National Bureau of Standards (UNBS) is a statutory body responsible for ensuring fairness in trade and precision in industry through reliable measurement systems.