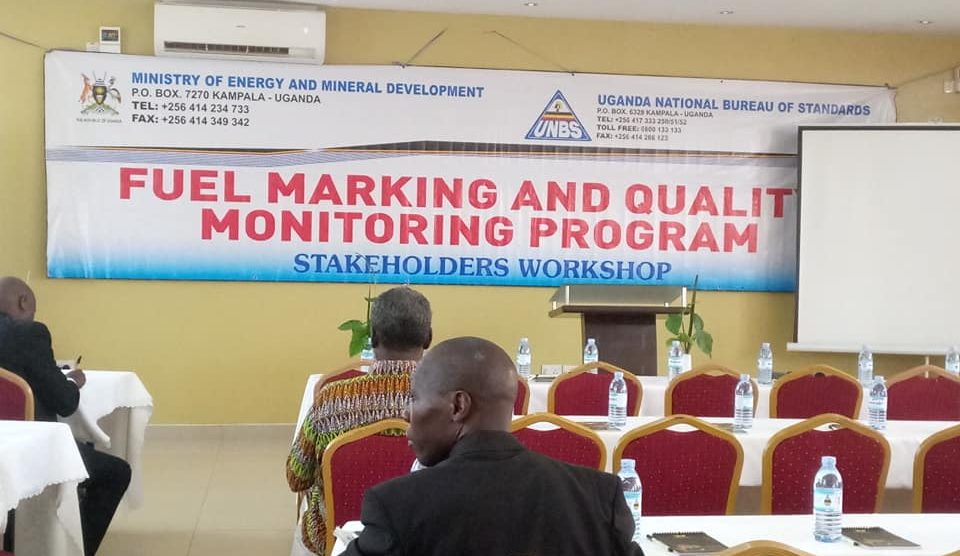 The Uganda National Bureau of Standards (UNBS) has cautioned players in the petroleum industry against operational offences.

The warning was made during a fuel marking stakeholder engagement with petroleum industry players in the Eastern region of Uganda, jointly organized by UNBS and the Ministry of Energy and Mineral Development, to manage lapses in the petroleum industry.

Peter Kitimbo, a UNBS Senior Metrologist revealed that when the Fuel Marking and Quality Monitoring Program (FMP) started in 2011, over 35% of petroleum products were not complying with the standards. Today however, less than 1% are non-compliant. He thus urged the fuel operators to ensure compliance and maintain zero tolerance to the bad practices in the industry.

Edward Nuwamanya from the Ministry of Energy and Mineral Development urged applicants for fuel station operations to ensure that they have an adequate size of land, a construction permit, an operating license from the Energy Ministry, ensure protection of public health, safety and environment in all operations, promote fair competition and eliminate unfavourable business practices.

Stakeholders from the Eastern region  of Uganda raised concerns over fuel stations erected in sharp corners and populated places, fuel stations operating without fire extinguishers, selling of fuel in jerrycans most especially in villages , using fuel tanks to transport milk, and many others.

They also asked UNBS to regulate the fuel leakages during transportation of fuel to curb the raised concerns.

UNBS Deputy Executive Director in charge of Standards, Patricia Ejalu called for improved collaboration between government institutions in the Petroleum industry to ensure that they all speak the same language while dealing with the raised concerns as they regulate the industry.

Week-long sensitization of residents against fuel adulteration was held in Kamuli, Jinja, Iganga, Mbale, Bugweri and other districts that make up the Eastern region of Uganda.

The Fuel Marking and Quality Monitoring Program (FMP) implemented under a cooperative arrangement between UNBS and Ministry of Energy and Mineral Development (MEMD) is a government program designed to control and monitor the quality of petroleum products in the entire supply chain in Uganda.

What coronavirus should teach us about BUBU

UNBS, Lira Oil millers agree to a month’s ultimatum for compliance to standards
UNBS clarification on applying for Destination Inspection for Diplomatic cargo in transit
Comment