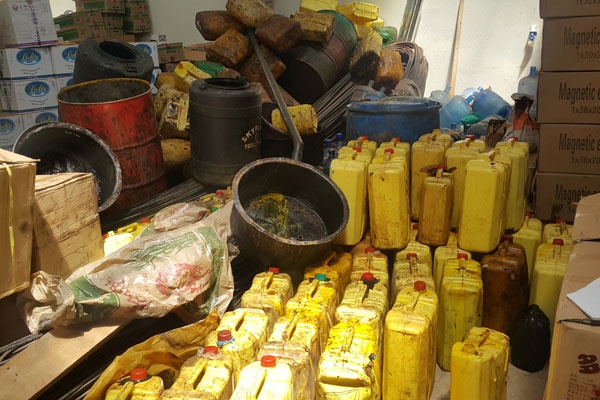 The Uganda National Bureau of Standards (UNBS) together with oil millers in Lira district held a meeting aimed out ironing out issues that hinder the latter from complying to quality standards.

The engagement, held on 19th March 2020, comes after an operation done by the UNBS surveillance team on 11th March 2020, that revealed a lot of substandard oil products and non-compliant oil mills in Lira district.

During the meeting, UNBS Surveillance Manager, Daniel Arorwa took the oil millers through some of the photos of their very unhygienic oil mills, that prompted UNBS to close them during the operation.

“We expect your facilities to be constantly cleaned and what we don’t want is packing oil in dirty jerrycans that are not labelled,” said Phillip Kahuma, a Principal Certification Officer at UNBS.

Kahuma made the remarks as he took the oil millers through the certification procedure and requirements.

The chairman of the Uganda National Chambers of Commerce and Industry, Lira branch, Deo Kibirige, urged the oil millers to employ a staff whose role is to ensure quality control and compliance to quality standards.

The oil millers, who were willing to take corrective measures, asked for a one month ultimatum to iron out their quality issues.

The UNBS Deputy Director in charge of Compliance, John Paul Musimami, who led the ‘Way forward session’ guided oil millers to ensure proper record keeping and good hygiene of the facilities IMMEDIATELY. Only labelling and starting on the certification process was given a month’s ultimatum.

The oil millers also asked UNBS for a testing laboratory to be erected in Lira as compared to Gulu because Lira is more industrial and asked for increased sensitizations for swift compliance.

The Uganda National Bureau of Standards (UNBS) is a statutory body responsible for developing and promoting standards and quality of products and services to facilitate fair trade, promote local industries and protect consumers.

What coronavirus should teach us about BUBU