Uganda has been appointed Coordinator for the Food and Agricultural Organisation / World Health Organisation (FAO/WHO) Coordinating Committee for Africa (CCAFRICA) for the period 2020 to 2022.

The appointment was made by the top body in the CODEX structures, Codex Alimentarius Commission, during its ongoing 43rd meeting held through virtual means.

This is the second time Codex Alimentarius Commission is appointing Uganda to coordinate CODEX activities in Africa, following its first appointment 20 years ago; from 1999 to – 2003. Uganda has been a member of CODEX since 1964.

Uganda, the only African country to coordinate CODEX activities in Africa for the second time, will be taking over from Kenya, whose tenure expires this year.

The Uganda National Bureau of Standards, which is the Codex Contact Point for Uganda as well as the National Codex Committee (NCC) Secretariat, is one of the Uganda Government’s Ministries, Departments and Agencies (MDAs) at the forefront of the coordination role in Africa.

The other key MDA’s in the process include the Ministry of Health (Chair of the NCC), which signed a letter confirming Uganda’s expression of interest to serve as the Coordinator, the Ministry of Agriculture, Animal Industry and Fisheries (MAAIF), The Ministry of Trade, Industry and Cooperatives (MTIC) and the National Drug Authority (NDA). The MDAs are at the frontline because of their central role in food safety. 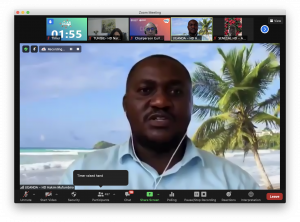 Uganda’s appointment will market Uganda’s tourism potential and raise awareness of food safety issues through Codex, such as strengthening the food control system in the Country and improving quality and safety of locally traded food commodities, raising the profile of Codex and food safety issues in Uganda, increased public awareness on standards for food products elaborated by Codex, positioning Uganda to have an improved access to regional and international markets for exports of her food commodities and products, foreign exchange earnings for the country and  promotion of the Tourism Industry.

During our tenure as coordinators, great attention will be given to generating regional priorities through a consultative process taking into consideration the coming into force of the African Continental Free Trade Area in January 2021 which is a turning point for the African Continent and food standards elaborated through the Codex system will be key enablers in facilitating trade in food and agriculture commodities and product across the continent and ensuring that the health of the over 1 billion inhabitants is protected.

It should be noted that Uganda is the only country in Africa which has co-hosted two CODEX committee meetings, in the last 10 years:;

CODEX Alimentarius Commission was established by the Food and Agricultural Organisation (FAO) and the World Health Organisation (WHO) in 1963, charged with developing International Food Standards to promote food quality and safety with the aim of protecting consumers’ health and ensuring fair practices in the food trade. It currently comprises of 189 members which include 188 member countries and the European Union.

The Uganda National Bureau of Standards is a statutory body responsible for developing, promoting and enforcing standards in protection of public health and safety, and the environment against dangerous and sub-standard products.