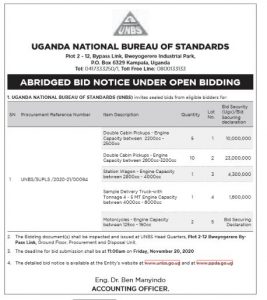 The Uganda National Bureau of Standards has released standards for the maize industry targeting millers and parkers, and warned processors who have no certification to cease operations. Uganda produces an estimated 2.5 million tons of maize, with exports worth between USD 120 and 150 million annually, mainly from the regional market.  This makes maize the biggest food crop Uganda produces in terms of value, both for the local and export markets. https://www.independent.co.ug/unbs-to-start-enforcing-maize-grain-and-flour-standards/

Uganda joined the rest of the world, on Wednesday to celebrate the world standards day, amidst warnings by the standards watchdog to penalize traders and local manufacturers found in contravention of the already set product standards.  The Uganda National Bureau of Standards (UNBS) said it would step upmarket surveillance inspections to ensure that substandard products are removed from the market to protect the health and safety of consumers. https://www.newvision.co.ug/news/1529474/uganda-celebrates-world-standards-day