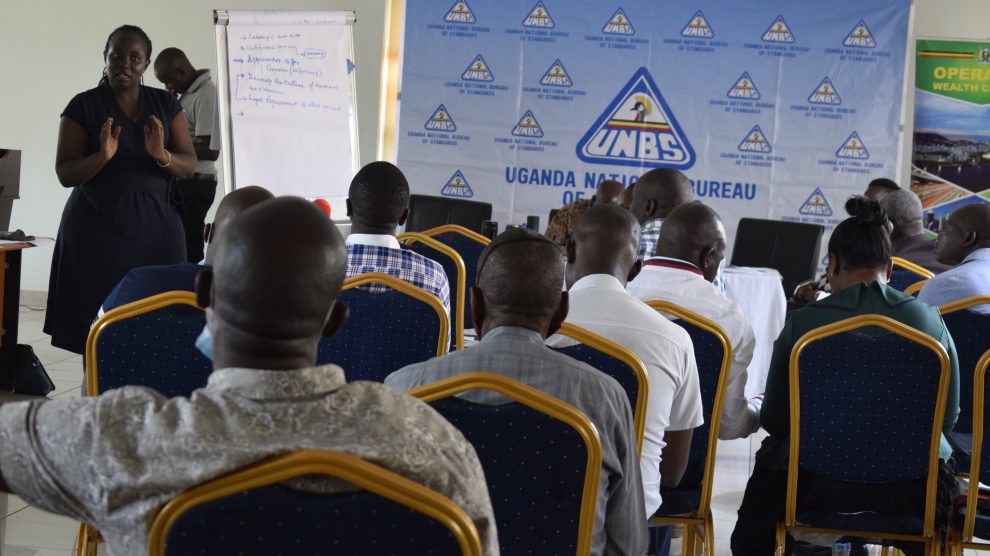 The Uganda National Bureau of Standards has cautioned maize flour dealers under Operation Wealth Creation against contamination of maize flour during the production process.

The UNBS Imports Inspection Manager, Mr. Martin Imalingat who represented the UNBS Ag. Executive Director, said that most of the maize is got clean from the garden, however, it is majorly contaminated at the production and storage stages due to poor hygiene and chemicals like pesticides used.

Mr. Imalingat asked the maize millers to learn and implement the standards to address the issue of maize flour contamination along the value chain.

The Operation Wealth Creation Director of Health and Community Outreach Campaign, Major Rubaramira Ruranga, who was the Chief Guest thanked UNBS for the initiative to train the Maize millers about standardization.

‘A lot of money and international markets have been lost by the Millers due to substandard maize flour. “ He said.

Major Rubaramira assured that Operation Wealth Creation will do everything possible to ensure that we they learn more about standardisation and production. He expressed the need for capacity building and asked UNBS to work with sub-county and Parish chiefs across the country. “UNBS needs to be Everywhere” He emphasized.

The Maize Millers were grateful for the engagement and asked for free standards, translation of standards to local languages, and leniency in UNBS enforcements.

The UNBS Senior Standards Officer, Pamela Akwap revealed that UNBS is offering standards at a highly subsidized price and that translation of standards is already ongoing.

The Millers called for more sensitizations most especially at the grass root level.

The Uganda National Bureau of Standards (UNBS) is a statutory body responsible for developing, promoting and enforcing standards in protection of Health and Safety of the public and the Environment well as facilitating Fair trade and Competition.