THE NEW VISION: UNBS to regulate walk through sanitizing booths

The Uganda National Bureau of Standards (UNBS) has set out to regulate walkthrough sanitizing booths, being used in the fight against the spread of the coronavirus pandemic. The booths, similar to metal detectors, offer automatic 360-degree disinfection within seconds, allowing public establishments, including companies and commercial places to stop the spread of pathogens in their premises. READ MORE HERE 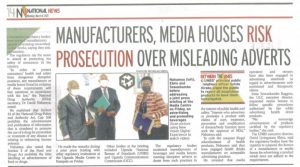 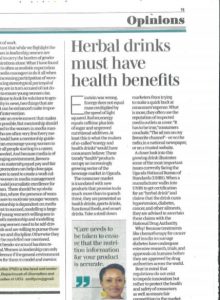 DAILY MONITOR ONLINE; Einstein was wrong. Energy does not equal mass multiplied by the speed of light squared. Rather, energy equals caffeine plus lots of sugar and unproved nutritional additives.  At least this is what the makers of so-called “energy and health drinks” would have consumers believe. READ MORE

PML DAILY; The advertisement and promotion of drinks with claims of health benefits has been stopped unless approved by the National Drug Authority (NDA), Uganda National Bureau of Standards (UNBS) and Uganda Communications Commission (UCC). READ MORE HERE

CHIMP REPORTS: The government has issued a ban on the advertisement and promotion of natural “health drinks”. READ MORE HERE 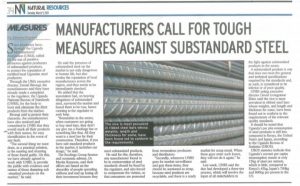