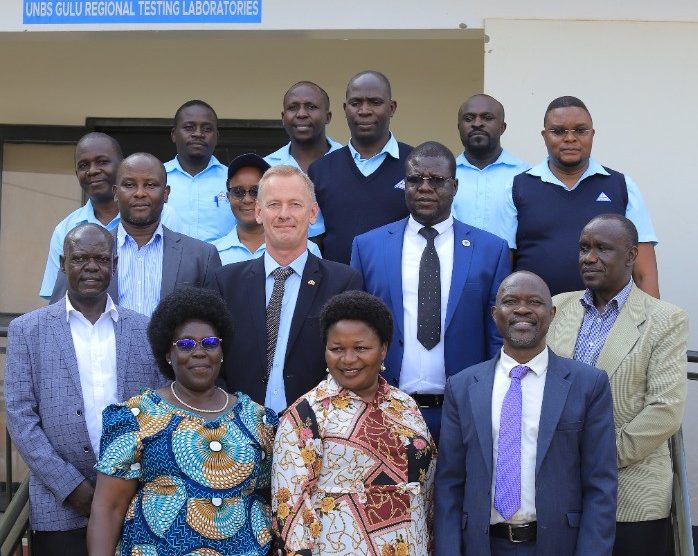 Uganda National Bureau of Standards (UNBS) has opened a Food Safety Testing Laboratory for Northern Region based in Gulu. The Equipment for the Laboratory was donated by VODP through Ministry of Agriculture, Animal Industry and Fisheries (MAAIF) and Trade Mark East Africa (TMEA) funded by the Danish Government.

According to Mr. David Livingstone Ebiru, the Executive Director of Uganda National Bureau of Standards (UNBS), the Bureau intends to open similar Testing Laboratories for Eastern Region based in Mbale and for Western Region based in Mbarara in the near future. He noted that by moving the Testing Laboratories nearer to the majority of Micro, Small and Medium Enterprises (MSMEs) based in the countryside, the cost of doing business will reduce since Enterprises who used to seek testing services from UNBS Central Laboratories in Kampala can now get them at Regional Offices. He also expects compliance to quality standards to improve and competitiveness of locally manufactured products enhanced.

The Regional Food Safety Laboratories will provide conformity assessment services to Enterprises and Industries involved in processing and value addition to ensure that their products meet the minimum quality standards before being put on the market.

The Laboratories will be testing both food and non-food products such as edible fats and oils, milk and milk products, water, fruits and vegetables, cereals and cereal products, grains and animal products, among others.

The Hon. Minister of State for Industry, Hon. David Bahati welcomed the Bureau’s initiative of decentralizing its services to the Regional Offices because this will support the Government’s Industrialization Agenda, given that the Government has opened up a number of Industrial Parks across the country. He noted that the Government programs such as the Parish Development Model (PDM) which is expected to stimulate production and value addition will require UNBS services of providing quality assurance to enable such products access both the domestic and export markets.

Mr. David Livingstone Ebiru thanked the Development Partners for the confidence and trust they have put in the Bureau by committing such significant resources towards the enhancement the Bureau’s laboratory testing capacity which is critical for quality assurance of Uganda’s products. He observed that the issue of safety and quality of products has become a key factor in market access and competition globally.

The Danish Ambassador to Uganda, H.E Nicolaj A. Hejberg Petersen, on his part thanked the Bureau for putting the support given to the best use and hoped that this will significantly contribute to the safety and quality of Ugandan made products on the market, as well as support the country’s Industrialization Agenda and Economic Development. He urged UNBS to prioritize vulnerable Enterprises which are owned by Women and Youth so that they are able to produce safe and quality products which are competitive on the market to provide them livelihood. He tasked the Enterprises to take advantage of the testing facility in order to benefit from emerging Regional and Continental Markets such as EAC and AfCFTA by exporting quality products.

Uganda National Bureau of Standards (UNBS) is a Government Agency responsible for the Developing, Promotion and Enforcement of National Standards in order to protect the Health and Safety of the Public and the Environment against Harmful and Sub-Standard Products; as well as Promoting Fair Trade Practices and Competition.

Electoral processes can be improved with Quality Management guidance